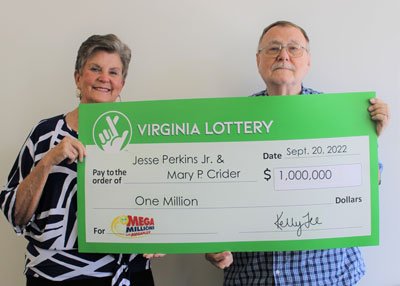 September 30, 2022 – Jesse Perkins and Mary Crider often play Mega Millions® together when the jackpot grows past the $200 million level. That’s what happened in the September 20 drawing, when the jackpot was an estimated $277 million. One of the tickets they bought ended up matching the first five winning numbers, missing only the Mega Ball number.

The siblings, both of whom live in Danville, Va., won Mega Millions’ $1 million prize.

“He told me we won, and I said, ‘Come on, it’s not April Fools Day!” Mary told Virginia Lottery officials as they claimed their prize. “I had to look at the ticket a couple of times because I couldn’t believe it!” Jesse added.

The winning numbers were 9-21-28-30-52, and the Mega Ball number was 10. The winning ticket was bought at the Sunrise 6, located at 2120 Franklin Turnpike in Danville. The store receives a $10,000 bonus from the Lottery for selling the winning ticket.

They used Easy Pick and allowed the computer to randomly select the numbers on the ticket. The ticket was one of just two nationwide to win the $1 million prize. No ticket in Virginia or elsewhere matched all six numbers in that drawing to win the jackpot.

Jesse said he has no immediate plans for his half of the winnings, except to donate to his favorite charities. Mary said she hopes to travel.

Here are the winning numbers for Friday’s $1.35B Mega Millions drawing